Hue is located in the central of Vietnam. The city is crossed by the famous Perfume River, which isolate the Citadel from the rest of the city. It was the capital of Vietnam under the Nguyen’s reign, between the early 19th century and 1945. During these times, the city acquired immense prestige and refinement that made it one of the richest cultural destinations of the country. Hue was recognized as UNESCO World Heritage Site on December 1993.

Thien Mu Pagoda (Heavenly Lady Pagoda) is located 5 km from the center of Hue, in a quiet place with a beautiful view of the Huong River (Perfume River). Tourists can make a 2-hour boat trip on the Huong River to visit the pagoda.

Tu Dam Pagoda is located 2 km from the city center. It is a combination of conventional and modern architecture, an old, spacious but simple building. It consists of 3 main parts: a front door with 3 alleys, a large house of worship, and a meeting room.

The Citadel is the most important site of Hue historical monuments.  The citadel was built for 30 years from 1804 under the command of the King Gia Long and was inspired by the fortifications of Vauban. It is a fortified town and consists of three parts: the capital city, the imperial city and the forbidden city, as well as more than 100 original architecture buildings spread over many sectors. The citadel was partly destroyed in 1968 during the Vietnam War, but many donations permitting nowadays to make revive this invaluable heritage.

The tomb of Tu Duc
The tomb of Tu Duc is located in a narrow valley, about 8 km from the center of Hue. Its architecture is representative of traditional Vietnamese art. Coming to Tu Duc Tomb, tourists may feel like they’re lost in a huge scenery park, where the old monuments of old feudal time are harmoniously in tune with the natural atmosphere.

The Tu Hieu Pagoda
Not far from the tomb of Tu Duc Emperor, about 5 km from the city center, there is the Tu Hieu pagoda. The Buddhist monk Nhat Dinh was at the origin of its construction in 1843. Even today, the pagoda hosts a very active community of monks that you will be invited to meet. In this calm and peaceful environment, you can discuss about serenity, search for peace and inner awakening. Hue is still one of the most important Buddhist centers of the country.

The tomb of Minh Mang is considered a great tomb, about 12 km from the city. It is a construction with a harmonious architecture that has never been seen, and which gives tourists an impression like they were visiting a space of painting, poetry and philosophy. The imposing, sedentary environment of this architecture as well as the inspiring landscape of the mausoleum reflect well the rigorous, profound and vast knowledge as well as the romantic soul of King Minh Mang.

The Perfume River (Huong River) is a symbol of Hue city. It is a beautiful and romantic river that crosses almost the whole city and many beautiful sites. You can take a boat trip to visit the royal tombs, the Hon Chen Palace and the Thien Mu Pagoda during the day, as well as listen to the royal music of Hue.

Lang Co Beach is located 80 km from Hue city and 30 km from Da Nang. The 10 km long sandy beach with clear turquoise water overlooks Lang Co Bay which is ranked among the most beautiful bays in the world. The hotels and resort in a peaceful oceanfront setting are an ideal place for tourists who want to temporary forget about urban life. 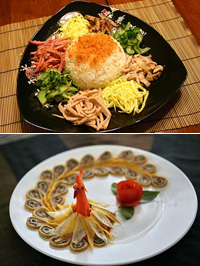 Hue cuisine is distinctive. Vietnamese people regard Hue as the capital of gastronomy. Hue has preserved over 1300 different dishes, from royal dishes to popular dishes, from vegetarian dishes to meat dishes ... that brings harmony between good taste and beauty, creating a unique eating style, a unique taste of Hue.
Besides the good taste, the dishes of Hue have the beautiful presentation. In addition, each dish contains the harmony between colors and tastes, between yin and yang, between warm and cold. The tray is also arranged carefully and coordinated the color of dishes in order to appeal customers. All that is the quintessence of Hue gastronomy.

Every tourist coming to Hue wants to taste the specialty of the city, this may be a bowl of “bun bo Hue”, “com hen”, or dessert such as “che sen”, “che cung dinh”...

When to go
Located in the tropical monsoon climate zone, Hue has two distinct seasons: the dry season from March to August, the rainy season is between August and January of the following year.
You can visit Hue all year round, yet the best season to visit Hue is from January to April. From May to August, it is hot (the temperature could reach 35-40OC). October and November are the period of typhoons and floods. Between December and January it is the rainy season.


DISTANCE BETWEEN HUE AND OTHER REGIONS