Ha Giang is a mountainous province in the extreme northeast of Vietnam, a very beautiful area away from tourist trails. The landscapes of Ha Giang are both grandiose and poetic with mountains that follow, the terraced rice fields, the Dong Van geopak, the famous pass of Ma Pi Leng...

The mountainous area of Ha Giang is the place where several ethnic minorities coexist such as H'mong, Tays, Daos, Lolos ... If you arrive once in Dong Van market, a typical market of the mountainous region that held every Sunday, you will live in full emotion. Men come to the market not only to shop, they also come to take drinks with their friends. 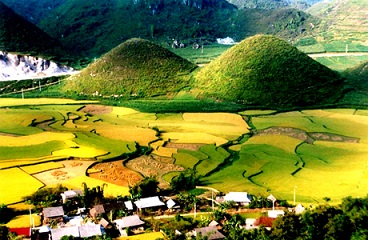 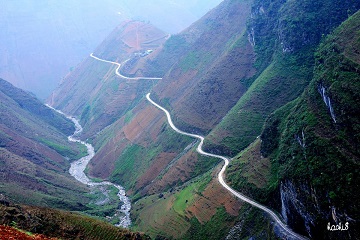 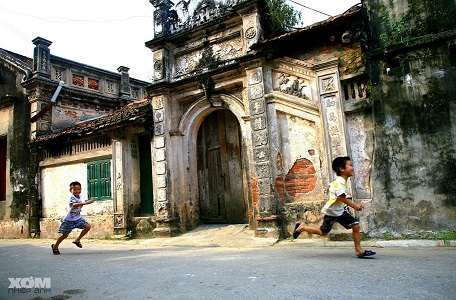 Dong Van geo-park - Dong Van karstic plateau
The karst plateau of Dông Van is located in the north of Hà Giang. It covers an area of 2,356 km² and encompasses four districts in the upper North: Quan Ba, Yen Minh, Dông Van and Mèo Vac.
On 3th October, 2010, Dong Van Karstic Plateau was recognized as a member of the Geo-parks Global Network. It is the unique site of Vietnam recognized and the 2nd in Southeast Asia.

The ancient town of Dong Van
Located about 145 km from Ha Giang centre, Dong Van ancient town is nestled in a beautiful valley in Dong Van District, Ha Giang Province. From Ha Giang, you will arrive at the ancient town after passing winding paths of the mountain.
The small town is built at the beginning of the 20th century, its unique architecture is kept until today: the houses have 2 floors, covered with Yin and Yang tiles, one next to the other as on an old street of Hanoi.

Dong Van town is also the place where the weekly market of ethnic groups is held every Sunday. It is the largest market in the region, where ethnic minorities descend of their mountains once a week throughout the year to sell all kinds of food, craft and medicinal products. A place for exchanges and business, the market is also a place of encounters and cultural practices among these ethnic groups.

Ma Pi Leng pass
Ma Pi Leng pass is one of the four highest passes in northern Vietnam. The pass is part of a road bearing the pretty name "Duong Hanh Phuc" (the road to happiness) which connects Hà Giang city, Dong Van plateau and Meo Vac town. It offers spectacular scenery: grandiose mountain chains, limestone mountain areas, Nho Que River at the foot of the pass.
It was a particularly dangerous way to reach Dong Van and Meo Vac areas, only the horses could pass on this road, which gave the name of the pass, Ma Pi Lèng, in the local language it means "the nose of the horse".
In 1959, the Govement decided to build a road linking Hà Giang city to the district of Mèo Vac with a length of 200 km, including the Ma Pi Leng pass with a length of 24 km. In the 1960s, this road was dug in the mountain by more than 20,000 peoples for 5 years. It was from this time that the road took the name "road of happiness", because this one helped to improve the living conditions of the local inhabitants. Currently, there is still a steal at the pass to commemorate these volunteer builders.

H'mong King Palace
On the way from Ha Giang to Dong Van, you will not miss the break at the Sa Phin Valley, 15 km from the Dong Van District, for a visit of Vuong Chi Sinh ancient Palace.
The palace replicating Chinese architecture, is located in the valley of Sa Phin, surrounded by the greenery of the trees. Built by Vuong Duc Chinh, the father of Vuong Chi Sinh, a very powerful and influential man who was named the H'mong king over the Dong Van area. The last vestige of the Vuong family has gone through 8 years of construction.
The palace is the former residence of the Vuong family, with an area of 1120 m2 and 64 rooms: living room, working room, rooms for family members, rooms for valets and soldiers, a food warehouse, a weapons warehouse, in particular a separate warehouse to contain opium. The visit of the palace will inspire you with an idea about the life of a rich H'mong family in this former house.

Climate
Located in the tropical climate of the monsoons, but due to its mountainous terrain, Ha Giang is colder than the plains and the middle regions nearby. The hottest months are June and July. The months most affected by rainfall and floodwaters are July and August. The coldest period is between December and January, during which time it would have snow on some places.
The best times to visit Ha Giang:
How to get there
The road from Hanoi to Ha Giang is 300km passing through Vinh Yen, Viet Tri, Tuyen Quang. It is in good condition but winds through mountain ranges. It takes about 7 hours to go from Hanoi to Ha Giang and you can take the private bus or the public bus. Sleeper buses are also available.