Buon Ma Thuot is a city in the heart of the Central Highlands, the country of the mountains and mysterious forests. It is also the country of extraordinary customs that inspire ethnologists, the country of coffee and rubber plantations as far as the eye can see.

Travelers will encounter several ethnic minorities in the region such as Xo Dang, Ba Na, Ede ... whose gong art has been named World Cultural Heritage by UNESCO. The ethnic minorities of the Central Highlands still preserve their cultural originality, especially through songs, dances and music. During the holidays, the villagers dance hand in hand around the fire on the sounds of the gongs.

The Central Highlands, especially Buon Ma Thuot, is famous for coffee plantation. Thanks to its basal soils which are particularly suitable for coffee growing, the area of coffee plantation grows more and more. Currently, the region ranks first in the world in the yield of harvested coffee, and makes Vietnam the second most important country among the countries that export coffee. Arriving in Buon Ma Thuot during the months of October and November, at the time of the coffee harvest, you will have the opportunity to see coffee gardens turning red by the fruit wall. 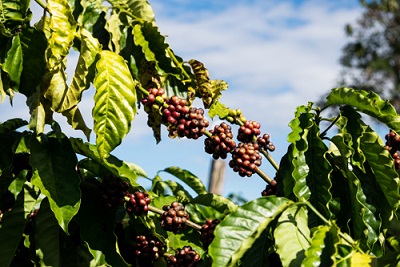 Akor D’Hong village
The village of Ako D'Hong is considered as the "origin" of Buon Ma Thuot city now, located about 2 km from the city center.
Formerly, it was the powerful and wealthy village, it was also called "Ama Rin village" - coming from the name of the village owner, who helped to clear the wild land and create the Ako D'Hong village today. At present, the old houses of the village are preserved, the villagers are helped to build a new house to remain, right next to the old house. These old houses are numbered. The village is very beautiful, the road leading you to visit the village is lined with colorful flowers.

Sac Tu Khai Doan pagoda
Sac Tu Khai Doan is the largest pagoda in Buon Ma Thuot city. It is the first pagoda built in the central highlands in 1951 by the Queen Mother Doan Huy. The Queen Nam Phuong was responsible for the construction management of the pagoda. Upon completion, the pagoda is called Khai Doan, this name comes from the name of Emperor Khai Dinh and Queen Mother Doan Huy. 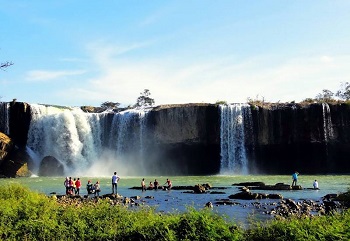 Dray Sap Waterfall and Dray Nur Waterfall
All Cascades Dray Sap and Dray Nur are located about 30km south of Buon Ma Thuot. The two spectacular waterfalls are formed by the two branches of the Serepok river.
According to local residents, the waterfalls are linked to a legend. As legend has it, there was a couple who loves each other, the boy is from a village and the daughter comes from another. Because of the conflict between two villages, the villagers forbid the marriage of the couple. Do not get the sympathy of the villagers, the conflict between the two villages remains irreconcilable, on a full moon night, the couple are jumped into the river to be together forever. Enraged by the villagers' selfishness which leads to the wrong decision of the young couple, the God makes a storm, the river rises very high dividing it into two branches. The two tributaries thus form spectacular waterfalls here.

Lak lake
Lak Lake is 50 km from Buon Ma Thuot and is the second largest natural freshwater lake in the country after Ba Be lake.
Early in the morning you can go canoeing on the lake. A little later, enter the villages of M'nong around the lake to discover the daily life, the work of the villagers or make beautiful pictures. Villages such as Jun village and Le village possess pristine landscapes.
In the afternoon you can visit the Bao Dai Villa on a hill, the small villa offers you a wonderful view of Lak lake


Don  village
About 50km west of the town, Don village located in the Yok Don National Park area - the country well known for hunting and taming wild elephants. Don village is the place of residence of many ethnic groups such as Ede, M'nong, Gia Rai, Lao, Thai ...
On the way to Don village from the city, you will have the opportunity to see the Dak Song River and the Serepok hydro-electric lake.
The most interesting activity in Don village is the elephant ride. The elephants will take you on an orientation tour around the village, and make you try a bit of the strong feel by crossing the Serepok River. On the way, you can buy sugar cane to reward elephants.

When to go
The region has two seasons during the year: In the rainy season, the precipitation in the area is very large, the rain falls every day from 9 am until 15-16h, so it is not favorable to the displacement. During the dry season, the months of March and April are the driest and hot, so the most favorable period for travel to Buon Ma Thuot is between November and February.


DISTANCE BETWEEN BUON MA THUOT AND OTHER REGIONS