Located about 240 km northeast of Hanoi, in the Ba Be National Park, Bac Kan province, Ba Be lake (the three bays or 3 connected lakes: Pe Lam, Pe Lu and Pe Leng) is known as one of the 20 special lakes of fresh water of the world to protect, according to an International Conference of fresh water lakes organized in the United States in 1995. And then in 2011 it was received the decision of UNESCO recognizing as the third RAMSAR site in Vietnam (after Xuan Thuy National Park - Nam Dinh province and Bau Sau in Cat Tien National Park - Dong Nai province). 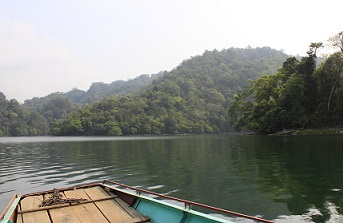 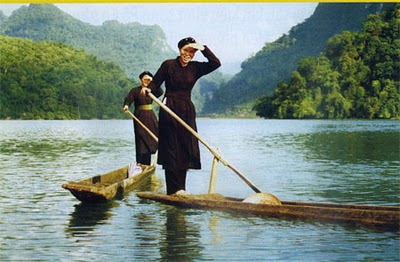 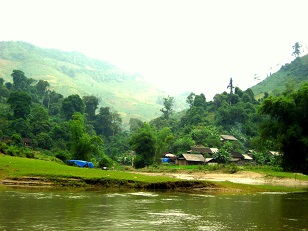 Surrounded by the limestone mountains and the fairly primitive tropical forest sheltered by hundreds of plant species and thousands of animals and insects such as: bears, primates, birds, butterflies ... Very picturesque islands: An Ma (figure of a horse) and Ba Goa. The shores of the lake are the refuge of some beautiful caves including the Puong cave, an invitation to explore the bowels of the earth. Within the Ba Be National Park, the majestic Na Dang and Dau Dang waterfalls also deserve a visit to enjoy the freshness and tranquility in the heart of the lush forest.

Ba Be lake is now an important ecotourism site in the Northeast Vietnam region. On arrival, visitors can admire beautiful landscapes forming by rocks and limestone mountains in this mountainous Halong Bay, houses on stilts of ethnic minorities surrounded by beautiful rice terraces. Visitors can also discover the geological richness and biodiversity (620 species of trees and 422 animal species have been recorded, including 55 animal species inscribed in the Vietnamese Red Book) that has been offered by our Creator.

In the vicinity of Ba Be lake, surrounded by a setting of waterfalls, streams, lakes and valleys, many tribes live here: the Tays, Nungs, Dzaos, H'mongs, M'nongs and Kinhs. In the spring, the Long Tong festival (ceremony of the beginning of field works) takes place on the 10th and 11th day of the 1st lunar month and attract many visitors.

The best season to visit Ba Be: From mid-September to mid-December and from March to mid-May.

DISTANCE BETWEEN BA BE AND OTHER REGIONS